skip to main | skip to sidebar

Shiloh Mounds, Cahokia, and Moundville Come Back to Life in Native American Novels

Step into the beautiful but violent world of ’s Forgotten Past in the epic twin novels People of the Weeping Eye and People of the Thunder by award-winning authors Kathleen and Michael Gear. Combining decades of writing for the commercial fiction market and professional archaeological research, the Gears link together three real and important archaeological sites in these two novels that readers can still visit today: Shiloh Indian Mounds in ( in the novel), Cahokia Mounds State Historic Site in , and in (). Learn more about these mysterious and fascinating sites by clicking on their museum park links in the Tourism Guide after the short excerpt below. They were each once powerful kingdoms that stretched their influence far down the rivers they overlooked. 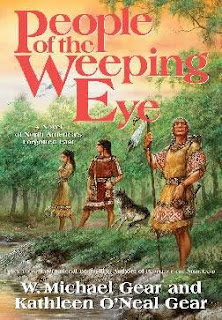 The Gears have written many Native American historical novels set in National Monuments and Parks around the country. If they update more of their novels with short interactive tourism guides and links to the real places, that could provide new digital gateways that allow readers to jump from the pages of their imaginations to the real sites as tourists. This would have a positive economic impact, especially during these challenging times. Embedded tourism guides would also enrich the readers by offering them a much deeper connection to the stories and the places. Each of the three sites in these two novels has a staff and museum for visitors to delve deeper into the real history of the area. Having been to the real Moundville, I can attest that nothing prepares a reader for the experience of stepping into the physical setting where the characters once lived and breathed in a time long before our own . . .

The Contrary—the woman once known as Two Petals—walked through the quiet night. Her moccasin-clad feet scuffed the plaza’s trampled surface, the sound of leather on clay like the whisper of distant ghosts. Her straight body moved purposefully, rounded hips swaying. Black flowing hair swung even with her buttocks, and she clutched a beaverhide blanket closely about her shoulders. With each exhalation, she watched her breath fog and rise toward the black, star-encrusted sky. Overhead, the constellations seemed to shimmer and wink against the winter night.
Around her, the great Yuchi capital known as slumbered. Even now the size of the city, with its tall, building-topped mounds, thousands of homes, temples, society houses, and granaries, amazed her. The city’s sleeping soul surrounded her like the low hum of insect wings. She could feel the immensity of it: all those thousands of souls breathing, mired in Dreams, their passions muted by sleep.
This was the western capital of the Yuchi—called the Tsoyaha in their own language. The city had been built on a high bluff overlooking the . The location had been chosen not only because it was well above the worst of the great river’s periodic floods, but it was strategically placed just below the river’s bend. Sheer heights on the east and north provided a natural defense, while the western and southern approaches were protected by a tall palisade bolstered by archers’ platforms every twenty paces. controlled passage up and down the Tenasee—the trade route carrying goods between the southeastern and northern river systems.
Though Two Petals had walked in the ghostly ruins of Cahokia and climbed its great mound, left her feeling humbled. Cahokia was a place of dried bones; flexed warm nerve and healthy muscle. It lived, thrived, and bristled with energy.
High temples, palaces, and society houses perched atop square earthen mounds capped by colored clays sacred to the Yuchi. The buildings reminded Two Petals of brooding guardians overlooking the empty plaza. The image was strengthened by steeply pitched thatch roofs that jutted arrogantly toward the heavens. Beyond them lay a packed maze of circular houses, their thickly plastered walls and roofs a uniquely Yuchi architectural form. The dark dwellings hunched in the night, as though weighted by the countless sleeping souls they sheltered.
The Contrary needed but close her eyes in order to sense the occupants. She experienced their Dreams the way an anchored rock knew the river’s current. The weight of their loves, hatreds, lusts, hungers, triumphs, and fears flowed around her. Were she to surrender her control, all of those demanding souls would filter past her skin, slip through her ears, nostrils, and mouth. Like permeable soil her body and souls would absorb them. Then, in the manner of a saturated earthen dam, she would slowly give way, carried off in bits, pieces, and streamers by the flood.
“But I am not earth.” No, I am a great stone. I stand resolute, lapped only by the waves of their Dreams. Feel them, washing up against me, seeking a grasp, only to drain away before the next. Two Petals clasped her arms around her chest, hugging herself for reassurance…
“You must lean to deal with what you have become,” Two Petals told herself. “Trouble is coming.”
She sighed, sensing a perpetual isolation of a person touched by Power. Forget the Dreams of others; her own were frightening enough. Not so many moons past, while in , she had been carried away on Sister Datura’s arms—born off to the Spirit World. The Visions she had had of the future remained just behind her eyes, as clear as when she’d first seen them. Were she to beckon, they would come flowing forward. She would again see the terrible black-souled chief, his hand trembling as it reached out to caress her naked skin. Or know the guilt-stricken eyes of a woman whose bloody hands dripped red splatters onto hard ground while she trembled beneath the twists of fate. In other scenes, an angry war chief led a thousand warriors through a silent forest. And finally, swirling water washed over a great scaled hide that shimmered with all the colors of the rainbow.
She fixed on that final image, staring into the great crystalline eye, as though looking through time and worlds into another reality. As she did, a faint Song began to fill her souls with a tremolo that echoed from her very bones. The melody rose and fell, lifting her spirits like a leaf on the breeze. Two Petals could feel herself rising, spinning, carried aloft on the vibrant notes. She began to Dance across the hard-packed plaza, arms undulating to the beat. Souls swaying in time to her skipping feet. The Song played within her.
“Soon,” she promised, her body spinning in time to the melody.
As quickly as it had come, the Song faded, leaving her to stand alone and motionless in Rainbow City’s great plaza—but one more of the many shadows that mingled in the night. In that instant she felt utterly destitute.
“You are never truly alone,” a familiar voice remarked . . .

---Excerpted from PEOPLE OF THE THUNDER Copyright © 2008 by W. Michael Gear and Kathleen O’Neal Gear

I first learned about the Gears’ historical novels from Senator Clay Scofield, Chairman of the Alabama Senate Tourism and Marketing Committee. Senator Scofield was kind enough to fly into to present the 2012 SELTI Tourism Fiction Award to Kathryn Lang during the Moundville Native American Festival. Read his wonderful speech, where he invited all authors to focus on real Alabama tourism attractions, by clicking here. Kathryn’s short story "Digging Up Bones" was set in Moundville and had won the Inaugural SELTI Writing Contest. After our radio interviews, Scofield mentioned to me that Moundville had also been the setting for a historical novel, which led me to read People of the Weeping Eye. After chatting with the authors, Kathleen and Michael Gear, I learned that People of the Thunder continued the story of Two Petals, Old White, and Trader, and that they had written many novels set in real places, although they had never included tourism links.

Although I had heard of Cahokia in from Moundville’s Director, Dr. Bill Bomar, I had not heard of the Shiloh Mounds in , “” in the novel. Because the Shiloh Mounds are part of the with the National Park Service, they were largely preserved. plays a key role in People of the Weeping Eye and continues in People of the Thunder. Although the original inhabitants of these cities abandoned them long ago, the ruins remain as haunting reminders of the cultures that once thrived on the rivers of this continent.

These novels are set in a time before the Europeans came, but also when is already in ruins. Although (Moundville) is still very much inhabited in the novel, another Gear novel, A Searing Wind, shows it also in ruins in another time period.

Many of the structures and physical remains of lost cultures around the nation have faded away, but not at these sites. One can still walk through the plazas and the climb the mounds that once served as vital cultural centers. The Gears are exceptional at bringing the reader into these worlds and allowing them to breathe the same air as the characters. Although the characters are fictional, they represent the real people who once lived in these cities.

I offer the short excerpt above from People of the Thunder as an example of the Gears’ quality writing style, a style that carries through in both novels. Please click on the links below to learn more about the Gears and the real places that their characters once lived in.


What do authors Kathleen and Michael Gear think of literary tourism? Click here to read in their own words.

Patrick Brian Miller
I am the founder of SELTI and author of Blind Fate, the first tourism novel in the world with an interactive travel guide inside the book (order here). Blind Fate has live links in the book that take readers instantly to the websites of the real tourism places found in the story--all with one click. Blind Fate was featured in USA Today for being the nation's first interactive tourism novel.. Also, please browse the SELTI features for online tourism guides to many Southern books. Email me at literarytourism@aol.com or SELTI Executive Director Kathryn Lang at kathrynlang@kathrynlang.com. For a more detailed explanation of SELTI, please visit the introduction page at: Southeastern Literary Tourism Initiative.